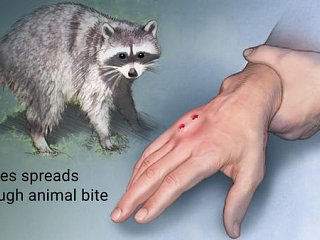 The Plainville-Southington Health District (PSHD) urges residents to avoid contact with wild and stray animals to protect themselves from the risk of rabies exposure.
Rabies is the oldest and deadliest disease known to mankind. It is a preventable disease. According to the Centers for Disease Control and Prevention (CDC) it kills 55,000 people needlessly each year, half of which are children under the age of 15. Most of these deaths occur in developing countries, but exposure to rabid animals is very prevalent in the United States.

Early symptoms of rabies include irritability, headache, fever and sometimes itching and pain at the site of exposure. The disease eventually progresses to paralysis, spasms of the throat muscles, convulsions, delirium and death. The incubation period is normally two to eight weeks.

Treatment of an animal bite requires prompt scrubbing of the bite site with soap and warm water for at least 5 minutes. Post-exposure protection from rabies consists of a series of five rabies vaccinations that must be started promptly.

“Rabies prevention starts with the pet owner,” said Shane Lockwood, PSHD Director of Health. “PSHD encourages residents to vaccinate their dogs, cats, ferrets, and any other animal that has regular contact with humans.”

“Immediate treatment after being bitten can stop rabies infection and/or prevent the disease in humans and animals,” said Lockwood.

According to the Connecticut Department of Public Health (DPH), 5,968 animals were tested for rabies in 2011 – 2013. Of these, 516 animals tested positive for the disease. The majority of animals that tested positive were raccoons (278) and skunks (126). For a complete list of animals that were tested visit DPH at http://www.ct.gov/dph/lib/dph/infectious_diseases/ctepinews/vol34no5.pdf.

PSHD does submit animal specimens to the Connecticut Department of Public Health laboratory for testing when appropriate. For details on submitting a specimen contact PSHD at 860-276-6275.

###
The mission of the Plainville Southington Health District is to preserve, protect, promote, and improve the quality of life in a healthy environment through the prevention of disease, ongoing health education opportunities and the enhancement of the well-being of its residents.